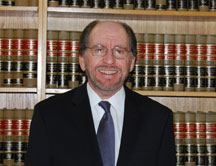 Gerald Eisenberg, a senior partner in the firm, has been a practicing lawyer in New York for more than forty years. As a founding member of the firm, he has focused his practice in the fields of Estate Planning, Estate Administration, and various aspects of Litigation, including Commercial and Probate Matters. During his career, Mr. Eisenberg has tried hundreds of lawsuits. His unvarying devotion, over the years, has been to give each client his personal attention and to treat each with the utmost respect.

Mr. Eisenberg was selected to the 2013 New York Super Lawyers list for having attained a high degree of peer recognition and professional achievement.